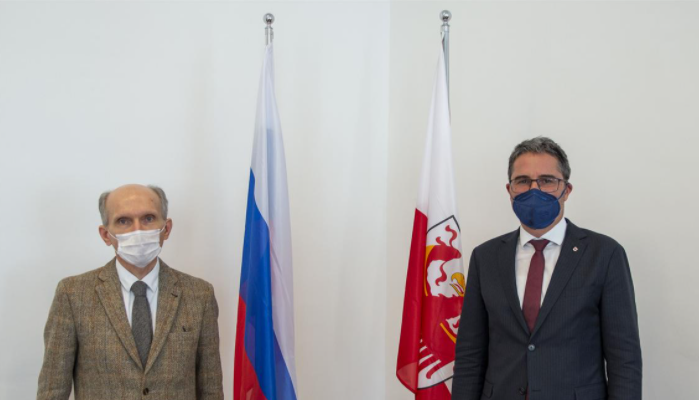 The cooperation between Russia and South Tyrol was the focus of a meeting between Provincial Governor Arno Kompatscher and the Russian Consul General in Milan, Dmitry Shtodin

On 13 January, Governor Arno Kompatscher received the Consul General of the Russian Federation in Milan, Dmitri Shtodin at Palais Widmann in Bolzano.

In their conversation, Kompatscher and Shtodin reiterated their desire to “continue the path of cooperation between South Tyrol and Russia in some key areas such as economy, tourism and culture”. Indeed, there are several South Tyrolean companies who have partners in Moscow, and both Kompatscher and Shtodin hope that relations, currently “somewhat cooled” by the Covid 19 pandemic, will intensify again once the Corona emergency is over.

The good cooperation within the framework of the association Russian Centre Nadezhda Ivanovna Borodina in Merano was highlighted. The centre promotes cultural and economic exchange between Russia and South Tyrol. For several years, the province of South Tyrol has provided the Borodina Association, whose members include the province, the Chamber of Commerce and the municipality of Merano, with free rooms in Villa Borodina and the Russian Orthodox Church in Merano’s Schafferstrasse.

Dmitry Shtodin was born in Moscow in 1963, has a university degree in political science and is a career diplomat. He was a senior official in the Russian Ministry of Foreign Affairs before being appointed Consul General of the Russian Federation in Milan in November 2020.