Autonomy Center in the Library Center 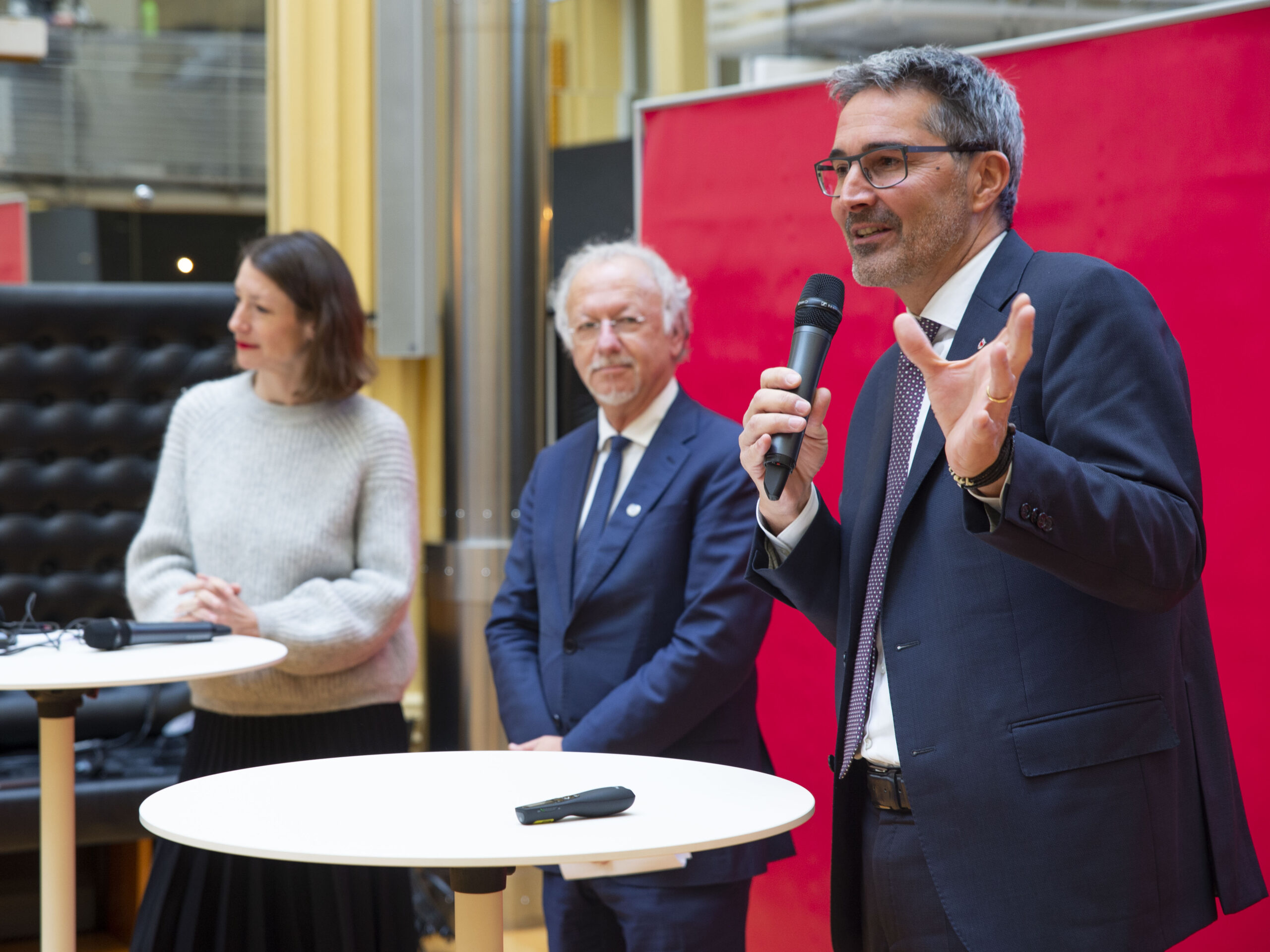 Communicating autonomy and minority protection in the best possible way: This is what an autonomy center in the new library center in Bolzano is supposed to do. Politicians and planners have presented the concept.

“United in Diversity” is the motto of the new Autonomy Center that will be built in the Library Center in Bolzano. The Library Center will unite the Provincial Library “Dr. Friedrich Teßmann”, the Italian Provincial Library “Claudia Augusta” and the City Library of Bolzano “Cesare Battisti” under one roof on about 15,000 square meters in five above-ground and two underground floors. In this “House of Media for all Language Groups and Generations” with two million books and media, there will also be space for a new Autonomy Center. The project for this Autonomy Center was presented today (December 15) at Landhaus 1 in Bolzano by Governor Arno Kompatscher and Bolzano Mayor Renzo Caramaschi, together with the architects of Atelier Brückner, in the presence of the UN Special Rapporteur on Minority Issues, Fernand De Varennes. The concept for the Autonomy Center and its incorporation into the Library Center, recently approved by the Provincial Government and the Municipality of Bolzano, was developed by a working group under the supervision of the Stuttgart architectural team “Atelier Brückner” and the Center for Autonomy Experience of Eurac Research. Today’s presentation was also attended by the three regional councillors for culture, Philipp Achammer, Daniel Alfreider and Giuliano Vettorato, as well as members of the working group in which the responsible regional offices (cultural departments, libraries, office for monuments) collaborated with Eurac Research and the universities of Bolzano and Innsbruck.

“In this Autonomy Center we want to present our autonomy and the sophisticated concept of minority protection that lies behind it,” explained Governor Arno Kompatscher at today’s presentation. On one hand, he said, the value of autonomy should be conveyed in the best possible way. “This is not about a ‘melting pot’ but about the strengthening of identity and the coming together and living together of strong identities as an added value in the sense of ‘United in Diversity‘.” In addition, he said, the new center should become a reference point for autonomy and minority protection. “We want to share our experience and, if possible, support the pacification of ethnic conflicts,” said the governor. The library center offers a suitable framework for such a reference center. All the partners involved, including the libraries as hosts, have spoken out in favor of its integration into the library center. Delegations and visitors from all over the world would be presented the model of South Tyrol autonomy over four floors, in four languages and through the four pillars of history, autonomy and protection of minorities, international conflicts and the future.

Massimo Bessone, the regional councillor responsible for building construction, shed light on the history of the library center: the approval of the space program the accommodation in the former school building “Pascoli-Longon” in 2000, the decision of the design competition for the project of the now deceased architect Christoph Mayr-Fingerle in 2006, the tender for the construction work in 2016, the award of the contract to the construction company “Condotte” in 2017, against which bankruptcy proceedings were opened in January 2018, and finally in January of this year the award of the contract to the second-placed bidding consortium under the leadership of the construction company CMP, which will now build the library center. “A lot of time has passed since the first course was set in 2000,” Provincial Councilor Bessone indicated, “during which time the lawyers have done more work on this issue than the engineers.” That will now change, announced the state councilor, who expects construction to begin in 2024.

He is pleased that this year’s anniversary of autonomy has led to the emergence of the Autonomy Center, said Bolzano Mayor Renzo Caramaschi. This center, he said, must not only serve documentation, but must be alive, provide space for culture, research and creativity. Bolzano’s mayor recalled that the city of Bolzano had supported the library project from the beginning and had made the site available for it.

Kathrin Milic-Grunwald presented the concept study for the Stuttgart-based Atelier Brückner, which has been designing museums for over 25 years and recently also made abstract content tangible and experienceable in the visitors’ center of the EU Parliament. This was prepared in six months in cooperation with a 24-member working group. According to it, the Autonomy Center will extend over 1600 square meters on four floors – from the first floor to the roof terrace – and will include open elements and closed spaces. The “autonomy prologue” and the localization of autonomy by means of a map take place on the first floor. The second floor deals with the future of autonomy. Autonomy today and in an international context is also told interactively on the second floor via experiential spaces and role plays. The history of autonomy and stories of autonomy will then be dealt with on the third floor. Finally, on the roof terrace, an autonomy garden with an autonomy pavilion will also provide space for events.

The Special Rapporteur on minority issues at the UN Human Rights Council, Fernand de Varennes, described South Tyrol’s autonomy as an example of conflict prevention and peaceful resolution in Europe and elsewhere. This model, he said, represents a responsibility that must be shared internationally. “South Tyrol is fulfilling this mandate of sharing responsibility and experience with the Autonomy Center, in the spirit of ‘United in Diversity,” said the UN Special Rapporteur on Minority Issues.